A Chapel at NCA and the Day that Followed 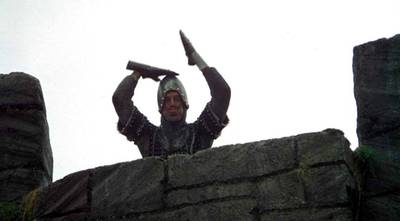 Josh 5:13-14
13 Now it came about when Joshua was by Jericho, that he lifted up his eyes and looked, and behold, a man was standing opposite him with his sword drawn in his hand, and Joshua went to him and said to him, “Are you for us or for our adversaries?”

14 He said, “No; rather I indeed come now as captain of the host of the LORD.” And Joshua fell on his face to the earth, and bowed down, and said to him, “What has my lord to say to his servant?”
NASU

To the lower elementary school, I showed Veggie Tales’ Josh and the Big Wall. We just saw part of the second half.  All the children were familiar with it, but after I had shown them a 10 minute clip I read them the Biblical narrative as paraphrased in the Children’s Bible The Book.  After a whole school worship singing, “Jesus we Love You” and “Better is One Day in Your Courts,” I dismissed the younger students and kept the Junior Highers.  I showed them the scene from Monty Python’s Holy Grail (Scene 9: where the French taunt the English from a big wall) and asked the students what connection they made.  Of course, they saw that it was connected with the Veggie Tales video.  Then I read them the narrative of Joshua 5 and 6.

As I was reading it to them, a few things struck me.  The people of Israel were God’s chosen people, but he had just made them run around in the desert and die for forty years. The people of Jericho were probably very similar to the people of America in their habits and way of life – and God ordered the death of every man, woman, child and animal.  Why didn’t he kill the Israelites who were approaching Jericho?  Why should they be spared?

When Joshua asked Jesus (Jesus is said to appear as The Angel of the Lord in Judges 5) whether he was on the side of the Israelites or Jericho, Jesus said, “No.”  Many of us, like Joshua, believe that God takes sides. And of course, as American Christians, we assume he’s on ours. Why?  I think Abraham Lincoln once said, “I do not ask whether God is on my side; I ask whether I am on God’s side.”  I think that this has implications for the elections in 33 days.  But I will write more about that later.

In chapel with the Junior Highers, I focused on God’s grace.  In this story, on whom does God lavish his grace?  It is the people of Israel.  Why?  Is it because they are any better than the people of Jericho?  No.  Mankind is evil.  However, when people choose to follow God, he shows them mercy and walks with them in grace:  Even going with them into battle.  The people of Jericho received the punishment for sin that we all deserve.

The students had trouble accepting that mankind is evil.  Jesus himself said this when he addressd his audience and said to them, “You, even though you are evil, know how to give good gifts to your children.”  James 4 tells us that when we do something as simple as leaving good undone it is evil.  However, we are raising children who think that they are good.  How can they see God’s grace in letting them live?  How can they see God’s grace in Christ’s death?  God pours out his grace on us through Jesus Christ when we trust him just like the poeple of Israel did at Jericho.  The Israelites humiliated themselves doing some crazy stuff.  They were not saved from God’s wrath and given the land BECAUSE they obeyed God, but God saw in them the faith of Abraham and credited it to them as righteousness.  I believe today’s children have skipped this evil, built up esteem in self and moved straight on to entitlement.  The children in chapel did accept that I included myself in the naturally evil category and that made them smile.

During the day I listened to Scott Thomas on the radio.  He is a Christian talk show host in Chicago.  With the Foley affair that is going on at the moment it seems like blood in the water for religious conservatives.  There is a feeding frenzy af judgement and condemnation for a sinner caught in sin.  Christians seem to think that it is their duty to pick up stones and throw them as soon as possible.  Foley has sinned as much as the woman who was brought to Jesus – but Jesus responded with grace.  I see little grace in the response that I see to sin in politics.  I believe that the masses of Americans who identify as Evangelical Conservatives forget in these feeding frenzies that they are sinners saved only by grace.

I was talking to a friend of mine who is a doctoral student studying philosophy at Loyola a couple of days ago.  He likes Kierkegaard a lot and so we talked about his view of sin.  Kierkegaard saw that God has unlimited grace and unlimited mercy.  How is it possible to have unlimited mercy unless there is unlimited sin to forgive?  The limitless sin dwells in the heart of each individual.  The log in our own eye is huge – expansive –  limitless.  God’s mercy, in a mysterious way, is greater.  My friend, Mark, told me that Kierkegaard never lost his sense of wonder at God’s forgiveness and grace.

Following the example of Jesus, I am slow to call anyone good.  God’s grace has redeemed me and made me righteous.  But in myself … the moral majority is scary because they seem to see their morality as self-generated.  I am afraid around them that I will cross one of their lines.

I was raised in England where we tried to evaluate the issues and, like Lincoln, try to get on God’s side on an election.  I see God being anti-abortion, pro the environment, for social justice, and opposing same-sex union.  that stretches a biblical perspective across both parties.  I have been told by American Christians that abortion trumps all of the other issues because innocent children die.  However, European Evangelicals believe that a global perspective would attribute even more death and distruction to America’s foreign and environmental policies.  I think that we should come to Jesus and ask him, “Are you for the Republicans or the Democrats?”  and I think that his reply would be, “No.”

I also think that a biblical view of politics is marked by justice and grace.  It is easy to see Christian hawks clamoring for justice … it is easy to see conservatives clamoring for resignations and punishment;  I find it hard to see defining acts of grace.  How do we pass on to those in the political arena the grace that we have received?

We should always be slow to condemn a person when judging their actions.  “Let he who is without sin cast the first stone.”  I promise to live a life in front of you that is marked by grace.  Please shelve your judgement, and live a life towards me that is marked by mercy and grace.  Perfect love casts out all fear, because fear has to do with punishment.  Let us not repay evil with evil, but overcome evil with good.