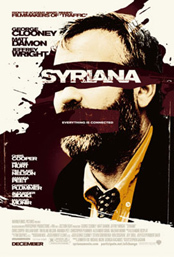 My wife and I went to a local French restaurant last night.  We sat down at a lavish table, and had fresh hot rolls handed to us by a waiter each time we asked for one.  I ordered a crab soup, a cabbage salad, lamb, and a chocolate cheesecake.  We talked about art, theatre, my wife’s writing assignments for her classes.  I remember thinking how grateful I was to live in America.  I could pay for the meal and leave a tip with no fear of my bank account running dry.

We were too tired to go to the local movie theatre, so we came home and ordered Syriana on PPV.  My wife snuggled up and fell asleep after about thirty minutes and I watched the tale of oil, business and terror unfold.

I know that the movie was based on a non-fiction book.  I also know that I teach in an environment that would see a movie like this and dismiss it as leftist propaganda.  As an educator, I believe that we need to engage with the world and see what it is doing.  As I read in Teaching Redemptively yesterday Christians are called to “encounter and transform the world, to be salt rubbed into a rotten world to prevent decay, not to self-righteously watch the “meat” rot.”(p.71)  There is something rotten in the oil business, something rotten in terrorism, something rotten in imperialistic attitudes – I think that we can call it sin.

It was early in the movie when I felt the rush of hearing a language that I was familiar with but not being able to understand what the people were saying.  I lived in Pakistan for 3 years and so I recognise Urdu when I hear it.  I immediately started to make connections in my head:  Pakistanis in the Gulf;  Terrorism;  England;  London bombings;  Students (talib ilm)who go to Pakistan and study Islam in schools (Are the schools called madrasas, or is that a curry?).  I watched as these Pakistani muslims got fired because of a Chinese takeover of their refinery or well and I knew where the movie was headed.  I think any of us could connect the dots.  However, I felt the sympathy and the anger that the film was trying to evoke.  After all, we are allowed to hate China – they’re communists.

The cycle of greed and hate continued and spun out of control.  Syriana depicts an America that is little more than a fascist state run by dictators with money – maybe you could call it an oligarchy.  Dictatorships installed and maintained by America and Britain in the Middle East need to be maintained and destabilized so that they keep paying the west.  Overt violence is perpetrated by frustrated, disenfranchized Muslims.  Covert violence is perpetrated by greedy, oil-thirsty Americans.  If any of this is true, I don’t condone it, but one thing shone out with purity and innocense.  The Muslim terrorist cell had unquestioning faith.  I think that it was meant to evoke sympathy, and I would have balked at such a cheesy ploy if I hadn’t lived in Pakistan myself.  I have envied Pakistani Muslims their faith in Allah.  When I was teaching in Gujranwala in 1988 I taught a class English.  We had discussions that invariably turned to religion.  I crossed a line by drawing a distinction between Mohammad and Jesus.  I said that Jesus was sinless and Mohammad had sinned.  The class went deathly quiet.  The oldest member of the class quietly stood up and said to me calmly, “Mr. Peter, class is over or else we will have to hurt you.”  After that my mostly Muslim class filed out quietly.  What struck me most was the unity and depth of conviction that they had in their faith.

It seems that in our post-modern times the solution to the conflict of faith is to pretend that we are all saying the same thing.  Muslims and Christians both have faith.  The playing field is leveled by saying, “Everyone has faith in something. ”  Even nihilists believe in the irreducable particles of physics (well some do).  Though faith is the same trust, the object of trust is different.  I look at the struggle of my faith and the certainty of the Muslim’s faith and a shock thought flashes through my mind.  “What if I am wrong?”

The Muslim and the Christian who know their faith know that they can’t both be right.  Either Isaac or Ishmael was the chosen son of Abraham; Either the Koran or the Bible is correct on this point.  Either Jesus died on the cross to save us fromour sins, or he was replaced by Judas because God does not let his prophets die.  There are logical dichotomies that seperate us.  Tolerance should not be the postmodern suspension of logic, it is the agreement to disgree.  It is the ability to walk away from the person who is telling you that your road leads to hell and to love them.

In the face of Muslim faith, I am forced to ask “Am I right?  Was Mohammad really sent to pull libertine Christians, Jews, and polytheists back to the truth of the Fear of God?”  I lay staring into the blackness of my pillow and thought it through.  How do I know?  Jehovah?  Allah?  Jesus?

If radical Muslims are correct in what they believe or think, it follows that actions founded firmly in correct belief would also be correct.  Any Christian who has read Joshua’s invasion of Canaan has to agree with this.  We believe that God did tell Joshua to kill every last man, woman and child in Jericho.  If Ai had a word for barbarian terrorist, they may have felt that they had repelled a people worthy of that name when Israel failed in their first attack.  What justifies religious action is being right.  The righteousness of God was shown in the terror of the actions he condoned.  It was as right for God to slay the Philistines through Israel as it is for us to put a man in jail for stealing.  Compared to the unsurpassed righteousness of God we all deserve destruction.  If this line of revelation and righteous destruction continued unbroken, I could accept a prophet like Mohammad who charged around The Arabian Peninsula sanctifying Mecca and offering a choice of repentance or the sword.

However, the revelation of God in the Injil (New Testament) is not corrupted.  We have peace with God through Jesus.  God’s righteous requirements of death and destruction are fully met in the horific death of the sinless one.  One died in place of the many.  Jesus was fully self-conscious with regard to his mission.  The grace that mankind does not deserve came in the form of a Jewish man.  He rode into Jerusalem on a donkey and offered the choice to become his followers.  Now, it is true that grace and peace do not eminate from countries like America and Britain that some claim to be Christian.  However, those who truly follow the way of Jesus are peacemakers.  The founder of Christianity brought an olive branch of mercy that triumphs over justice.  The truth of this stands in opposition to a call back to a cowering distance from God and an uncertainty of salvation.

I was able to sleep and whisper into my pillow, “Thank you for grace.  GRACE.  Grace.  grace.”  And I slept in peace hoping that one day I would have faith worthy of a Muslim martyr.

3 Responses to Respect for Islam