How Is Jesus Greater than Angels? 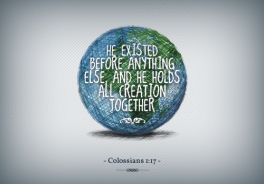 In the ancient world people had a high regard for angels.  In the town of Colossae the regard for angels was particularly high.  Because Colossians looked to angels so much, their view of Jesus might have been obscured.  This led the apostle Paul to write a list of attributes of Christ which elevated Jesus and put the angels in their place.  Because of some of the amazing things Paul claimed to be true, some scholars claimed Paul created a ‘Christ’ who was quite different than the historical person Jesus.  Here is a list of things Paul claimed were true about Jesus Christ.

Paul makes it clear, Christ is to have supremacy in all things.  Some people call this Christ the ‘Cosmic Christ’ because of the scope of these truth claims.  He definitely doesn’t look like any normal human being.  The church tries to get its head around these claims.  The church has always claimed two natures for Jesus – a human nature and a divine nature.  Jesus, the man, was born in Israel two thousand years ago.  Before that he preexisted in eternity past.  Theologians think it is Jesus who appears in the Old Testament to Abraham and stands with Shadrach, Meshach and Abednego in the fiery furnace.  They say The Angel of the Lord who appears in the Old Testament is the preincarnate Jesus visiting Earth.  Bold claims.

If Jesus does have supremacy in all things, Christianity is a religion like no other.  No other religion has the Cosmic Christ.  However, if Jesus was just a moral teacher whose bones are somewhere in Palestine, Christianity is one more man-made myth among the many created through the ages.  As I get older, I am more convinced that Christianity is true and an exceptional being walked humbly among us.  I believe the Bible is true, so I believe Paul’s words are worth meditating upon.  If such a being exists, we have reason to turn away from angels, ouija boards, other religions, and self help-philosophies.  We need to look first of all to him and see where he leads us.  Then we follow the only one who is worthy of our everything.

The Son [Jesus] is the image of the invisible God, the firstborn over all creation. For in him all things were created: things in heaven and on earth, visible and invisible, whether thrones or powers or rulers or authorities; all things have been created through him and for him. He is before all things, and in him all things hold together. And he is the head of the body, the church; he is the beginning and the firstborn from among the dead, so that in everything he might have the supremacy. For God was pleased to have all his fullness dwell in him, and through him to reconcile to himself all things, whether things on earth or things in heaven, by making peace through his blood, shed on the cross.

Once you were alienated from God and were enemies in your minds because of your evil behavior. But now he has reconciled you by Christ’s physical body through death to present you holy in his sight, without blemish and free from accusation— if you continue in your faith, established and firm, and do not move from the hope held out in the gospel. This is the gospel that you heard and that has been proclaimed to every creature under heaven, and of which I, Paul, have become a servant.