Godly Responses to Others

A lot of movies focus on revenge.  In some cases a loved one is killed and so a ‘nice-guy’ turned vigilante hunts them down.  In some high-school movies like Mean Girls, the hero is victimized for being different but the movie shows how the meanest girls (or boys) will

be exposed for what they have done.  We are rooting for justice.  We want to see a repayment of tooth for tooth or bruise for bruise.  We think of the times when we have been powerless and we live the life of the misunderstood, rejected, or abused.

The Bible deals with a lot of rejection.  Hannah was rejected by her rival in 1 Samuel 1 because she could not have children.  David was rejected by Saul because Saul was jealous of David’s popularity.  And, of course, Jesus was rejected and killed by the establishment of his day.  In Romans 12:9-21 Paul deals with the temptation to be vengeful and mean that rises up in all of us. We establish a right response to each other when we genuinely love each other and  when we repay mean actions with kindness.

9 Let love be genuine. Abhor what is evil; hold fast to what is good.10 Love one another with brotherly affection. Outdo one another in showing honour. 11 Do not be slothful in zeal, be fervent in spirit, serve the Lord. 12 Rejoice in hope, be patient in tribulation, be constant in prayer. 13 Contribute to the needs of the saints and seek to show hospitality.

14 Bless those who persecute you; bless and do not curse them.15 Rejoice with those who rejoice, weep with those who weep. 16 Live in harmony with one another. Do not be haughty, but associate with the lowly.  Never be wise in your own sight. 17 Repay no one evil for evil, but give thought to do what is honourable in the sight of all. 18 If possible, so far as it depends on you, live peaceably with all. 19 Beloved,never avenge yourselves, but leave it to the wrath of God, for it is written, “Vengeance is mine, I will repay, says the Lord.” 20 To the contrary, “if your enemy is hungry, feed him; if he is thirsty, give him something to drink; for by so doing you will heap burning coals on his head.” 21 Do not be overcome by evil, but overcome evil with good.

Responding to others with genuine love is harder than it sounds.  It is easy to fool ourselves into thinking that our love is genuine.  However, the kind of self-sacrificial and others centered love that the Bible requires is rare.  ‘Evil,’ in the Bible, is that which obstructs the goodness of God.  We are aware that murder, rape, or abuse hinder God’s goodness. Christians often battle these things.  Poverty, lack of education, and civil 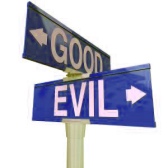 ‘Evil’ is anything that obstructs God’s good.

injustice bother us, too, but we might not be as motivated to deal with them.  However, a cold look, giving the silent treatment, or gossiping to a friend also withhold God’s goodness.  In doing these seemingly trivial things we are acting in ways that are evil.  The Bible says to abhor or hate it when our character falls short of his design.  The tepid responses that we have to some of our own evil is abhorrent to God and we need to deal with it with the same zeal.

Brotherly affection is a type of love.  There are at least four loves in Greek:  agape, phileo, storge, and eros.  Paul is referring here to more of the phileo emphasis.  Love has a certain level of camaraderie.  Christians should be doing life together with an affection that reflects our shared values.  The fact that this doesn’t happen and that some of the worst rivalries can be found between those within the church is disturbing.  The pure passionate love of God is perhaps reflected in the believer when zeal is emphasized by Paul.  God exhibits his love in the Passion of the Christ.  God came for us and rescued us.  He sacrificed everything for us and our love for our brother and sister in Christ should take similar emotional risks.  It is hard, when love wars with fear, to step out in vulnerability and love in spite of our fears.  Hope, patience and constancy are aspects of love which are reflected in the classic 1 Corinthians 13 chapter.  Paul is consistent in the qualities of love that he describes.  Love is not a chaotic and unpredictable flood of emotion, it is a dependable and committed act of will.  Of course, emotion can be rightly associated with a true love, but it is not its foundation.

In my early twenties I would have claimed to have loved the women that I dated.  I had strong emotions which caused me to think of them often.  However, I was often overcome with fear.  I would fear whether I was making a wrong choice for my future.  I would fear about whether the relationship was really honouring to God.  I would fear that I would be abandoned.  My fears overcame my protestations of love and acted irrationally and inconsistently – even cruelly.  My love really didn’t qualify for the consistent commitment that God gives.

We maintain community by the way we love and this is shown particularly in how we respond to conflict.  Jesus told us to turn the other cheek.  Paul tells us to bless the person who wishes to do us harm.  To bless someone means to become an advocate for God’s goodness in their life.  It means to become a conduit for flourishing.  Paul comes at this idea in many ways in the second paragraph above.  Through restatement he emphasizes that we should give up our fervent desire to defend ourselves.  Although we may be misunderstood, we don’t need to try and make another person see us as we want to be perceived.

The focus of Paul is not on revenge but on serving God.

I was discussing about atheists the other day.  Not all atheists are angry at God, but some really do spend a lot of time arguing about a God they believe doesn’t exist.  Some are even really angry with the God they spend so much of their time debunking.  Graham Greene in his book, The End of the Affair, writes about a woman who is convinced of God’s existence because of the emotional response of an atheist.  She listens to his arguments and studies under his passion, but concludes that there must be a God because of the fervour of the atheist’s atheism.  The argument against God would be far stronger if less people cared about His existence.

Our issues and our adversaries have less power over us when we can just let them go.  We are even given a direction in which to release them.  We hand all our worries, our adversaries, and our obsessions over to God. If we hang on to a desire for retribution it harms us as well as the one we want to receive justice.  In the end love will win out and love has much more healing potential than revenge.