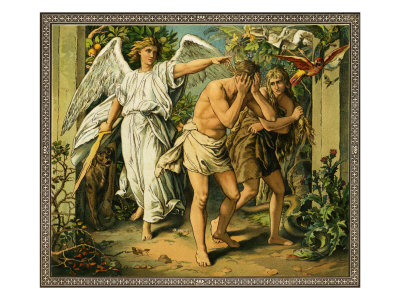 8 And they heard the sound of the Lord God walking in the garden in the cool[c]of the day, and the man and his wife hid themselves from the presence of the Lord God among the trees of the garden. 9 But the Lord God called to the man and said to him, “Where are you?” 10 And he said, “I heard the sound of you in the garden, and I was afraid, because I was naked, and I hid myself.” 11 He said, “Who told you that you were naked? Have you eaten of the tree of which I commanded you not to eat?” 12 The man said, “The woman whom you gave to be with me, she gave me fruit of the tree, and I ate.” 13 Then the Lord God said to the woman, “What is this that you have done?” The woman said, “The serpent deceived me, and I ate.”

14 The Lord God said to the serpent,

“Because you have done this,
cursed are you above all livestock
and above all beasts of the field;
on your belly you shall go,
and dust you shall eat
all the days of your life.
15 I will put enmity between you and the woman,
and between your offspring and her offspring;
he shall bruise your head,
and you shall bruise his heel.”

“I will surely multiply your pain in childbearing;
in pain you shall bring forth children.
Your desire shall be for your husband,
and he shall rule over you.”

“Because you have listened to the voice of your wife
and have eaten of the tree
of which I commanded you,
‘You shall not eat of it’,
cursed is the ground because of you;
in pain you shall eat of it all the days of your life;
18 thorns and thistles it shall bring forth for you;
and you shall eat the plants of the field.
19 By the sweat of your face
you shall eat bread,
till you return to the ground,
for out of it you were taken;
for you are dust,
and to dust you shall return.”

20 The man called his wife’s name Eve, because she was the mother of all living.[g] 21 And the Lord God made for Adam and for his wife garments of skins and clothed them.

22 Then the Lord God said, “Behold, the man has become like one of us in knowing good and evil. Now, lest he reach out his hand and take also of the tree of life and eat, and live for ever—” 23 therefore the Lord God sent him out from the garden of Eden to work the ground from which he was taken. 24 He drove out the man, and at the east of the garden of Eden he placed the cherubim and a flaming sword that turned every way to guard the way to the tree of life.

When I play some card games and board games we have to play good versus evil.  My friends like to cast themselves as the good guys and so I often have to play the role of the bad guys.  In one game I have often played as the Dark Elves and they often cast a hex on their enemies.  A hex is a spell that disables or damages an opponent.  Maybe it drains their life away.  Maybe it freezes them.  When I think of the word curse I often think of it in those terms.  I think of a voodoo woman in the bayou sticking pins in a cloth doll.  So how does God curse mankind in the above passage?  I see no cauldron or pointed black hats.

The curse of Genesis three is the removal of God’s blessing and the removal of his presence.  We see that God had caused the vegetation and the animals to flourish in the Garden of Eden.  No more.  Now God will allow the land to grow wild.  Mankind will need to work the ground harder.  There will be fewer instances of low-lying fruit.  Plants like thorn bushes and thistles will make the landscape more hostile.  Maybe they always grew outside the garden, but now ‘outside the garden’ has become the home of the first couple.

In leaving the garden mankind leaves their communion with God.  Having abused the relationship, like all relationships, the level of intimacy is damaged.  God still sustains and exists wherever people live, but there is no fellowship.  Now evil forces will work against mankind and mankind will fight against them.  There will be wars on earth and there will be death.  There will be decay of Adam and Eve and they will fade back into the dust from which they are formed.

In pronouncing a curse, God does not pronounce some hideous action toward Adam and Eve.  God pronounces their departure from Utopia.  The rest of scripture will describe mankind’s quest to regain Eden.  It is not because of the destination, though.  It is because of God’s presence.

For many today, Lord, this curse sounds like no curse at all.  It sounds like freedom and independence.  It sounds like mankind’s dreams were realised.  I don’t feel that way.  I see you as absent in too many ways and I long for re-admittance to The Garden.  Show us the way to bring your ideals to this earth once more.