The two of them, sent on their way by the Holy Spirit, went down to Seleucia and sailed from there to Cyprus. 5 When they arrived at Salamis, they proclaimed the word of God in the Jewish synagogues. John was with them as their helper.

6 They traveled through the whole island until they came to Paphos. There they met a Jewish sorcerer and false prophet named Bar-Jesus, 7 who was an attendant of the proconsul, Sergius Paulus. The proconsul, an intelligent man, sent for Barnabas and Saul because he wanted to hear the word of God. 8 But Elymas the sorcerer (for that is what his name means) opposed them and tried to turn the proconsul from the faith. 9 Then Saul, who was also called Paul, filled with the Holy Spirit, looked straight at Elymas and said, 10 “You are a child of the devil and an enemy of everything that is right! You are full of all kinds of deceit and trickery. Will you never stop perverting the right ways of the Lord?11 Now the hand of the Lord is against you. You are going to be blind for a time, not even able to see the light of the sun.”

Immediately mist and darkness came over him, and he groped about, seeking someone to lead him by the hand. 12 When the proconsul saw what had happened, he believed, for he was amazed at the teaching about the Lord.

When an Enemy Goes Too Far

What happened to turning the other cheek in the passage above?  The sorcerer stands opposed to the gospel, but he is a man like any other man.  Shouldn’t he be respected because he is created in the image of God?  Shouldn’t he be asked politely to stop and if he refuses, couldn’t the apostles be a little nicer to him?

In respect to personal injury, it is in most circumstances that we can oppose opposition through turning the other cheek.  Turning the other cheek need not be a weak and cowardly act.  Sometimes it is provocative to walk up to an aggressor and offer them the opportunity to hit you a second time.  Gandhi and MLK show us the power of allowing brutality to be highlighted by non-violent protest.  However, when the gospel and God’s work are threatened we are sometimes justified in meeting fire with fire.  The cause of the gospel is at stake here on Cyprus and Bar-Jesus is standing in its way.  He must be pushed aside, not for the personal advancement of Paul and Barnabas, but for the advancement of God’s cause.

It is hard sometimes to understand the proclamation of the nature of a person’s character. Bar-Jesus has so given himself over to  manipulation of the elements through magic that it has become part of his character.  He can change his nature, but the needs in these circumstances are immediate.  He can not be given time to examine his ways and turn from his evil-doing.  He is therefore stopped by a supernatural act.  To some this may seem cruel, however his physical blindness may cause him to reflect and see the light.  This seeming act of aggression and cruelty stops him from opposing the only thing in life that really matters.  It would also give Bar-Jesus a reason to assess whether his own life is on the right track.  In that sense it is grace. 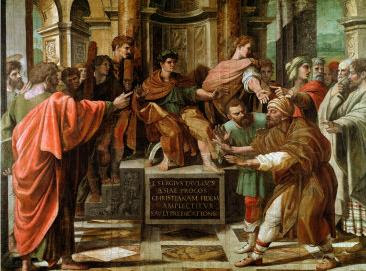 Help us to see when we need to actively oppose evil and to do powerful things to bring change.  Help us also to know when the change needs to start with us.