19 “There was a rich man who was clothed in purple and fine linen and who feasted sumptuously every day. 20 And at his gate was laid a poor man named Lazarus, covered with sores, 21 who desired to be fed with what fell from the rich man’s table. Moreover, even the dogs came and licked his sores. 22 The poor man died and was carried by the angels to Abraham’s side.[f] The rich man also died and was buried, 23 and in Hades, being in torment, he lifted up his eyes and saw Abraham far off and Lazarus at his side. 24 And he called out, ‘Father Abraham, have mercy on me, and send Lazarus to dip the end of his finger in water and cool my tongue, for I am in anguish in this flame.’ 25 But Abraham said, ‘Child, remember that you in your lifetime received your good things, and Lazarus in like manner bad things; but now he is comforted here, and you are in anguish. 26 And besides all this, between us and you a great chasm has been fixed, in order that those who would pass from here to you may not do so, and none may cross from there to us.’ 27 And he said, ‘Then I beg you, father, to send him to my father’s house— 28 for I have five brothers[g]—so that he may warn them, lest they also come into this place of torment.’ 29 But Abraham said, ‘They have Moses and the Prophets; let them hear them.’30 And he said, ‘No, father Abraham, but if someone goes to them from the dead, they will repent.’ 31 He said to him, ‘If they do not hear Moses and the Prophets, neither will they be convinced if someone should rise from the dead.’”

We all expect to be treated in the manner to which we are accustomed.  What if that is wrong?  The rich man has all the mod cons.  Being dressed in purple was like wearing Gucci or Armani.  He eats the equivalent to lobster and steak every day.  He has an attitude that disregards the poor as insignificant and beneath him.  In contrast Lazarus sits at the gate and wishes just for the left overs to come his way.  Note how Lazarus is named showing his humanity and the rich man is anonymous reversing the expected import of the individuals.

Then they die.  In death the rich man still expects service and has a passive approach.  He is entitled to Lazarus coming to him as he might have in life.  He makes requests that the gospel be preached in a way that is designed by him.  However, God has a plan and he has done things his own way.  God used prophets and scriptures to speak to Israel, but those who have it easy in this life so often forget about the life to come.  Lazarus would have looked to the next life as his only hope and would have welcomed the life that death brought.  The rich man had no thought of death and lives in horror and torment because of his carelessness.

There is a chasm between heaven and hell that no person can cross.  This detail in the parable is reinforced elsewhere.  Parables and proverbs in the Bible do the same thing.  They take two contrasting situations and smash them together.  In the minds of the listeners the wise man would be the rich man.  Bounty and provision is lavished on the wise for their wise living in the wisdom literature of the Bible.  However, Jesus reverses this popular narrowing of the context by illustrating a wise man living in poverty and a rich man who is complacent.  Wise saying make their point by looking a lot like life.  They call us to live a certain way.  The call us to walk a path.  Jesus’ way is the way of love which dies to self.  Many in his day lived a way of ‘self’ .which eventually dies to love.  In a loveless eternity anguish will be unquenchable.  Will you choose the way of the wise beggar or the fool with riches and comfort? 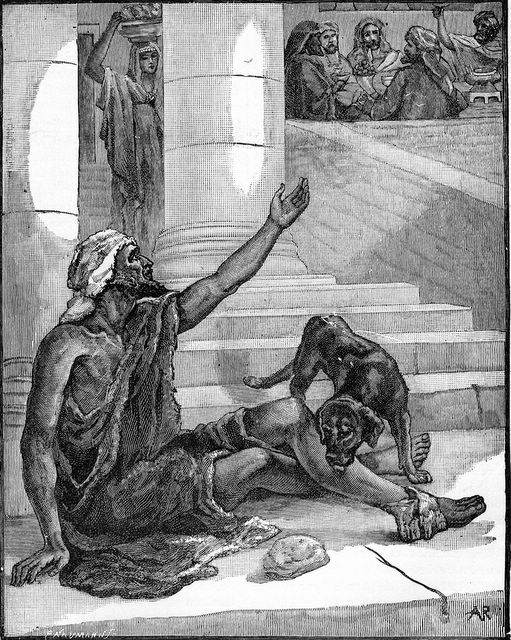 I pass beggars each day on the streets, but I don’t know how to approach them with wisdom.  Is it wise to give them the money they ask for when a cigarette is hanging from their mouths and they reek of alcohol.  If they ask me for a meal I will give it to them.  I will look to give to projects that can help them.  However, I lack wisdom when it comes to the man on the street rattling his coins in a cup.