37 While Jesus[e] was speaking, a Pharisee asked him to dine with him, so he went in and reclined at table. 38 The Pharisee was astonished to see that he did not first wash before dinner. 39 And the Lord said to him, “Now you Pharisees cleanse the outside of the cup and of the dish, but inside you are full of greed and wickedness. 40 You fools! Did not he who made the outside make the inside also? 41 But give as alms those things that are within, and behold, everything is clean for you.

45 One of the lawyers answered him, “Teacher, in saying these things you insult us also.” 46 And he said, “Woe to you lawyers also! For you load people with burdens hard to bear, and you yourselves do not touch the burdens with one of your fingers. 47 Woe to you! For you build the tombs of the prophets whom your fathers killed. 48 So you are witnesses and you consent to the deeds of your fathers, for they killed them, and you build their tombs. 49 Therefore also the Wisdom of God said, ‘I will send them prophets and apostles, some of whom they will kill and persecute’, 50 so that the blood of all the prophets, shed from the foundation of the world, may be charged against this generation, 51 from the blood of Abel to the blood of Zechariah, who perished between the altar and the sanctuary. Yes, I tell you, it will be required of this generation. 52 Woe to you lawyers!For you have taken away the key of knowledge. You did not enter yourselves, and you hindered those who were entering.”

53 As he went away from there, the scribes and the Pharisees began to press him hard and to provoke him to speak about many things, 54 lying in wait for him, to catch him in something he might say.

Jesus pronounces woe upon the Pharisees and lawyers.  Doesn’t this seem like an over-reaction to people who just had a bit of a dig about the way Jesus washed his hands.  However, the way that Jesus was criticized for washing his hands the wrong way was just a symptom of an ‘over-helpful’ spirit.  Tiger McLuen came to our class and talked to us when I was in class at Trinity.  He said that one of his workers warned him that he was about to fail in leadership and all his workers, including his friend, would walk out on him.  Why?  Because he was improving his organisation by continuously pointing out all the little things they did wrong.

In his book, Lifetime Guarantee, Bill Gillham, talks about how he was creating a living hell for his wife by correcting her on every little fault.  He would find something that still needed addressing in the way she dressed, the way she cooked, or any other area of deficiency.  Meanwhile, he did not put himself under the same scrutiny.  Fortunately, God got a hold of him before his wife had a breakdown.

Jesus tells the truth to people, but he then provides himself.  Pharisees reject the truth about themselves whilst identifying every little detail in the lives of others.  They reject people on the basis of petty rules and they approve of others who do so.  However, you walk a very fine line and one small violation of the law means you are condemned with very little chance of redemption. 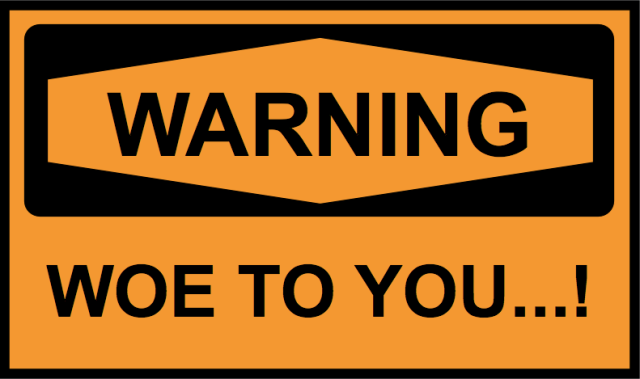 Father, I can be a hypocrite.  I have been accused of it in the past.  I know I can be a Pharisee, too.  Let me speak the truth in love so that others will grow.